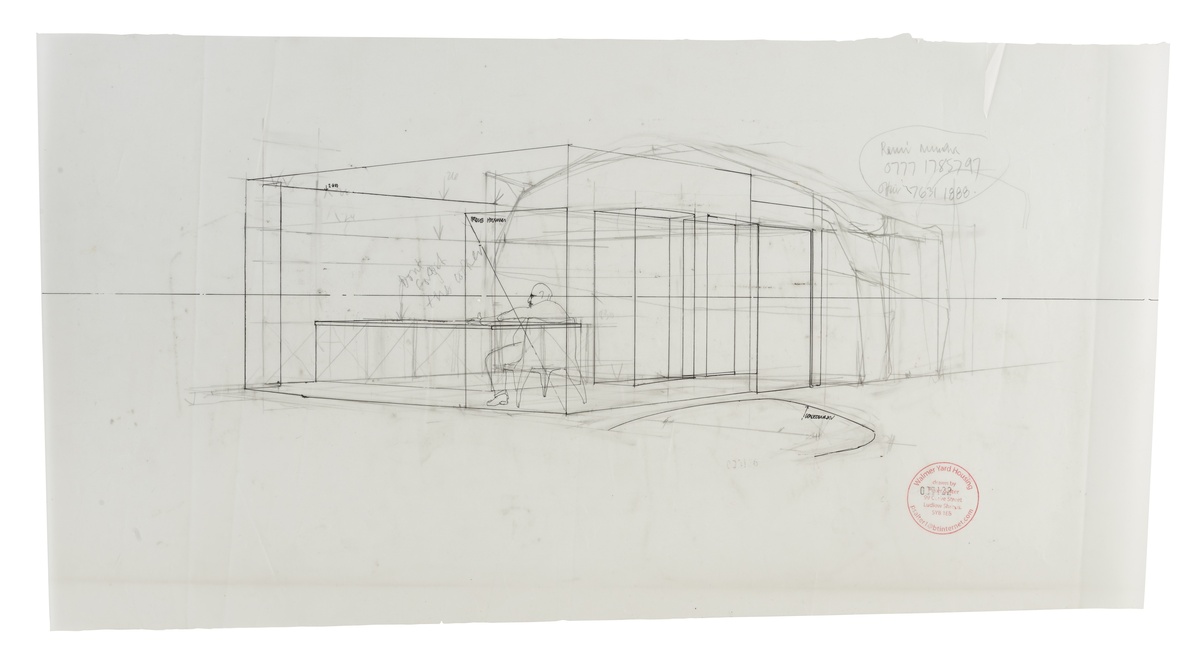 To mark the launch of Peter Salter’s first residential building in Britain, the gallery presents a selection of Salter’s architectural drawings for this project, Walmer Yard, seven years in the making. Internationally acclaimed as a teacher and architectural designer, Peter Salter has been commissioned to create four new houses in Walmer Road, Holland Park. A master class in urban living, the complex geometry of Salter’s design facilitates privacy, light throughout the day and unimpeded circulation of space.

Exploratory, indicative, and instructive, Salter’s drawings oscillate between place and detail, idea and representation, strategy and materiality. Persuasively imaging a lived environment, Salter effortlessly shifts between high level planning and intricate detail – an overarching idea is formulated through the exposition of detail. One sheet of tracing paper might encompass scales of 1:100, 1:20 and 1:1 as a problem is worked through; controlled struggle to enable critical development resides on the surface of the tracing paper. The integrity of the idea manifests through the removal of extraneous information, variation in stress and weighting of pen lines, and the whimsical figures that populate the drawings, sleeping, sitting, and reading. Salter writes “Because of the fragmentary nature of idea and detail, the drawing becomes a compound of notions. Intuition becomes honed by redrawing, the judgement of the eye tuned by retracing the familiar, and sometimes a critical reading achieved through erasure.”

Peter Salter AADipl (Hons) was educated at and taught at the AA for 13 years, in Intermediate and Diploma School. In the early years of his career he worked for Alison and Peter Smithson, and his work attempts to carry the convictions of that practice. In 2004 he was jointly awarded the Annie Spinks prize for Excellence in Teaching, reaffirmed by the award of an Honorary Fellow of the RIBA in 2012. Following seven years as Head of School (Architecture) at the University of East London, he was appointed Professor of Architecture at the Welsh School of Architecture, Cardiff, where he still teaches. His early built projects were in Japan, including the Inami Woodcarving Museum and Kamiichi Pavilion; Walmer Yard is his first building in the UK.

A fully illustrated catalogue with new essays by Peter Salter and Fenella Collingridge will accompany the exhibition.