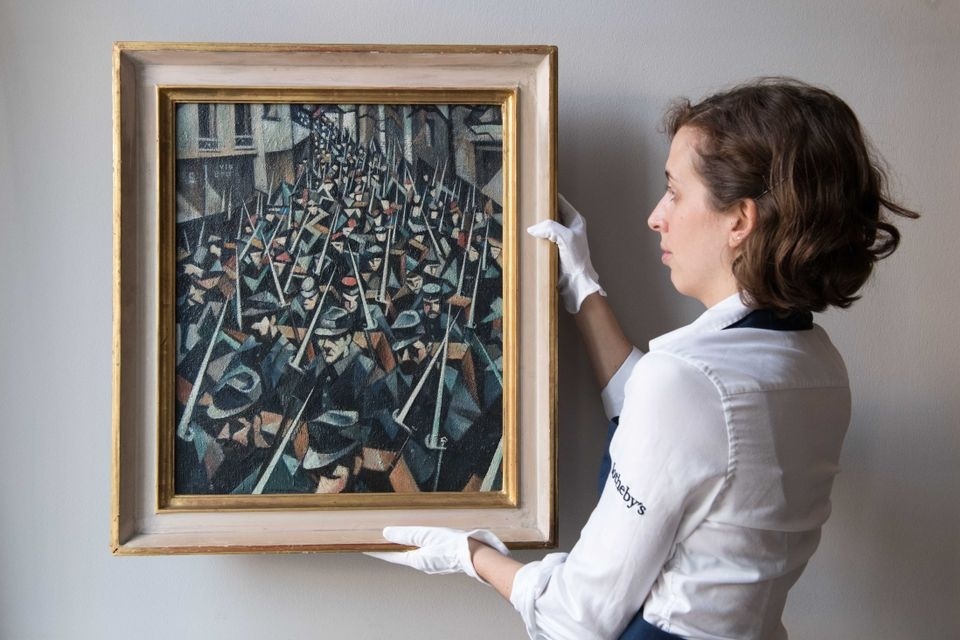 Last sold 50 years ago, A Dawn depicts French troops marching to trenches through Flanders in 1914.

"Although his prints are more numerous, C.R.W. Nevinson’s First World War oil paintings rarely come on the market—most are in private or institutional collections. But, almost 50 years after it was last sold at Sotheby’s in 1964, A Dawn (1914) returns to the auction house, estimated at £700,000-£1m in the Modern & post-war British art sale on 21 November."

"Last year, Sotheby’s made a world record for Nevinson when a small 1916 pastel study for French Troops Resting, a painting now in the Imperial War Museum, sold for £473,000 (with fees). The £700,000-£1m estimate on A Dawn is, therefore, strong, but Matthew Travers, director of London gallery Piano Nobile, thinks it is justified."

“Nevinson’s war oils never come up and in quality and style this is arguably on a par with anything in the Imperial War Museum and as good as La Mitrailleuse in the Tate,” Travers says. “The marching mass relates very closely to his lithographs. If a small pastel can make nearly half a million, then up to a million for an oil isn’t that crazy.”

For the full article visit The Art Newspaper Online

Since the publication of this article, A Dawn has sold for 1,869,000 GBP (Hammer Price with Buyer's Premium).