Retreating to Cornwall in 1945, John Armstrong began making visionary paintings of leaves and feathers. His imagery brims with surreal poetry.

John Armstrong, On the Promenade, 1947

A tense combination of the imagined and the observed animates paintings made by John Armstrong (1893–1973) between 1946 and 1948. His subjects are at once real and incredible, the details of leaves, feathers and flowers painstakingly translated into the painter’s medium, while an exaggerated sense of scale and a desert-like setting, familiar from the work of Giorgio de Chirico, transform these pictures into flights of fantasy. 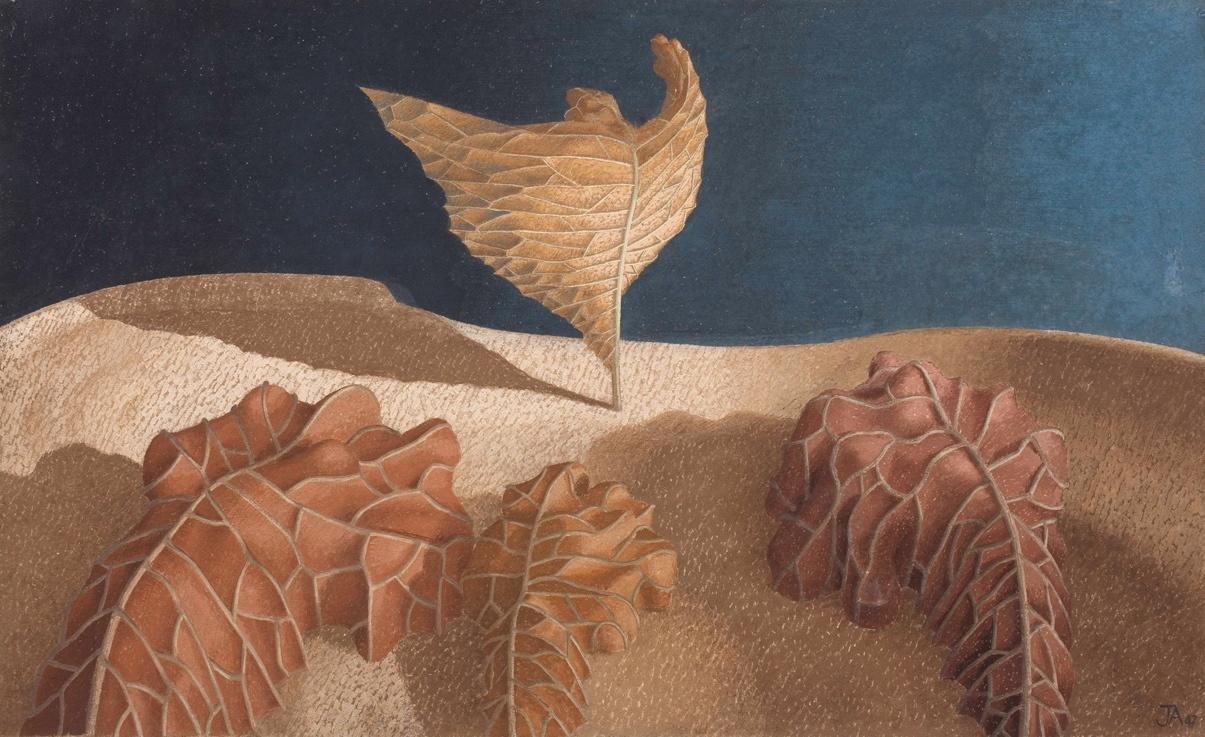 Armstrong retained in these paintings a consistent sense of space and lighting, even as he jettisoned key aspects of reality. The terrain in On the Promenade is desert-like and ominous, devoid of life but for the two central objects. The quills of these feathers puncture the sandy earth, as though they had emerged and grown up like plants with subterranean roots. The tentacular outlines of each feather ripple in a strange breeze. Not merely acted on by external forces, the feathers writhe and twist and seem to communicate with one another. No words can convey the nature of their conversation. With feathers, leaves and flowers, Armstrong adopted the earlier surrealist landscape idiom of Paul Nash and re-shaped it to make to make his own original poetic statements. An alternative title for On the Promenade is inscribed on the reverse of the painting, ‘Struggle by the Sea’, which alludes to some obscure but traumatic seaside drama. 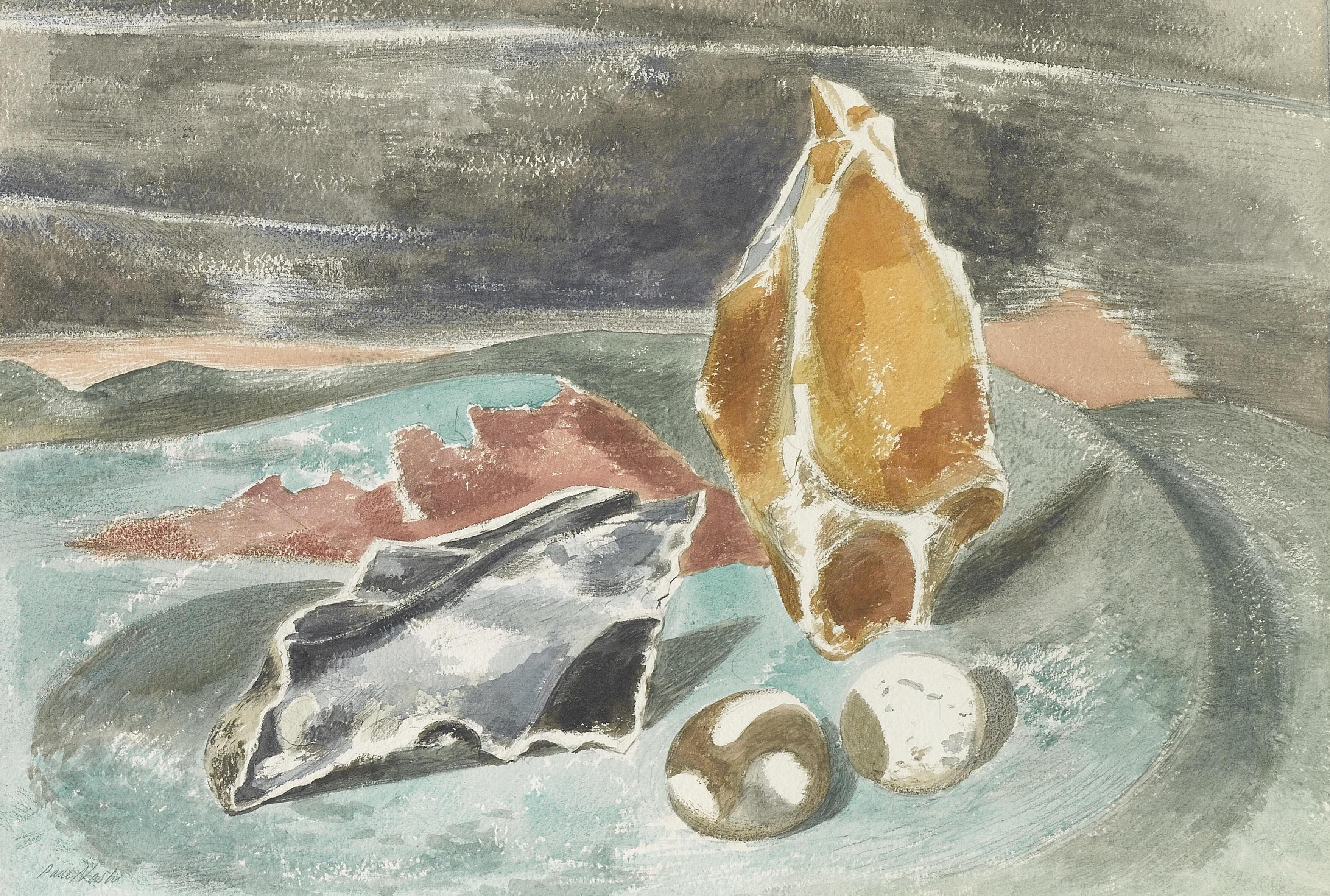 In Modern English Painters, John Rothenstein wrote that Armstrong’s pictures of this period are ‘highly complex, although at first glance simple, and have a haunting aura.’ ‘Armstrong’, he continued, ‘has never received the recognition due for these highly original works.’ More recently, the leading specialist on Armstrong’s work Jonathan Gibbs noted how the verdant landscape of Lamorna, Cornwall, where the artist moved in 1945, infested Armstrong’s imagination and significantly affected his work at the time. Referring to earlier paintings of shells and seaweed, Gibbs wrote in 2017:

The remarkable and gigantic vegetation of Lamorna supercharged this imagery, and from 1946 through to 1948, Armstrong produced a visionary series of works populated with anthropomorphic flowers, leaves and feathers […]. In the most intriguing of these paintings, the observer is presented with mysterious objects, somewhere on the natural spectrum from flint to bone to flower, in a timeless landscape.

Armstrong was painting with tempera almost from the beginning of his career, starting sometime in the late 1920s. An opaque egg-based medium, tempera dries quickly and allows for only limited corrections. Precision of placement is strongly apparent in On the Promenade, the surface of which is a mosaic made from clean touches of a square brush. Each application of the brush was apparently added exactly as required, further contributing to the picture’s mood of visionary intensity.

Tempera was the medium of choice in southern Europe until the late fifteenth century, when the use of oil-based paints became the norm. It enjoyed a revival in England in the late nineteenth century, initially among painters inspired by the ideals of the Arts and Crafts movement such as Joseph Southall. Edward Wadsworth adopted it in the early 1920s for his eerie scenes of deserted shipyards and still-life seashells, and was followed by Armstrong, with both artists exhibiting together from time to time, most notably as members of the modernist group Unit One.

On the Promenade and Armstrong’s other organic paintings of the mid-1940s register a period-specific sense of unease and uncertainty. After the joy of victory had faded, the post-war years witnessed shortages at home and looming threats abroad, most notably from the advent of the atom bomb. From his rural retreat in Cornwall, Armstrong conceived other-worldly imagery that addressed in an alternative universe the peculiar mixture of optimism and despair which defined that transitional moment in history.

The back door to Oriental Cottage, Lamorna, where Armstrong lived from 1945

On the Promenade (detail)