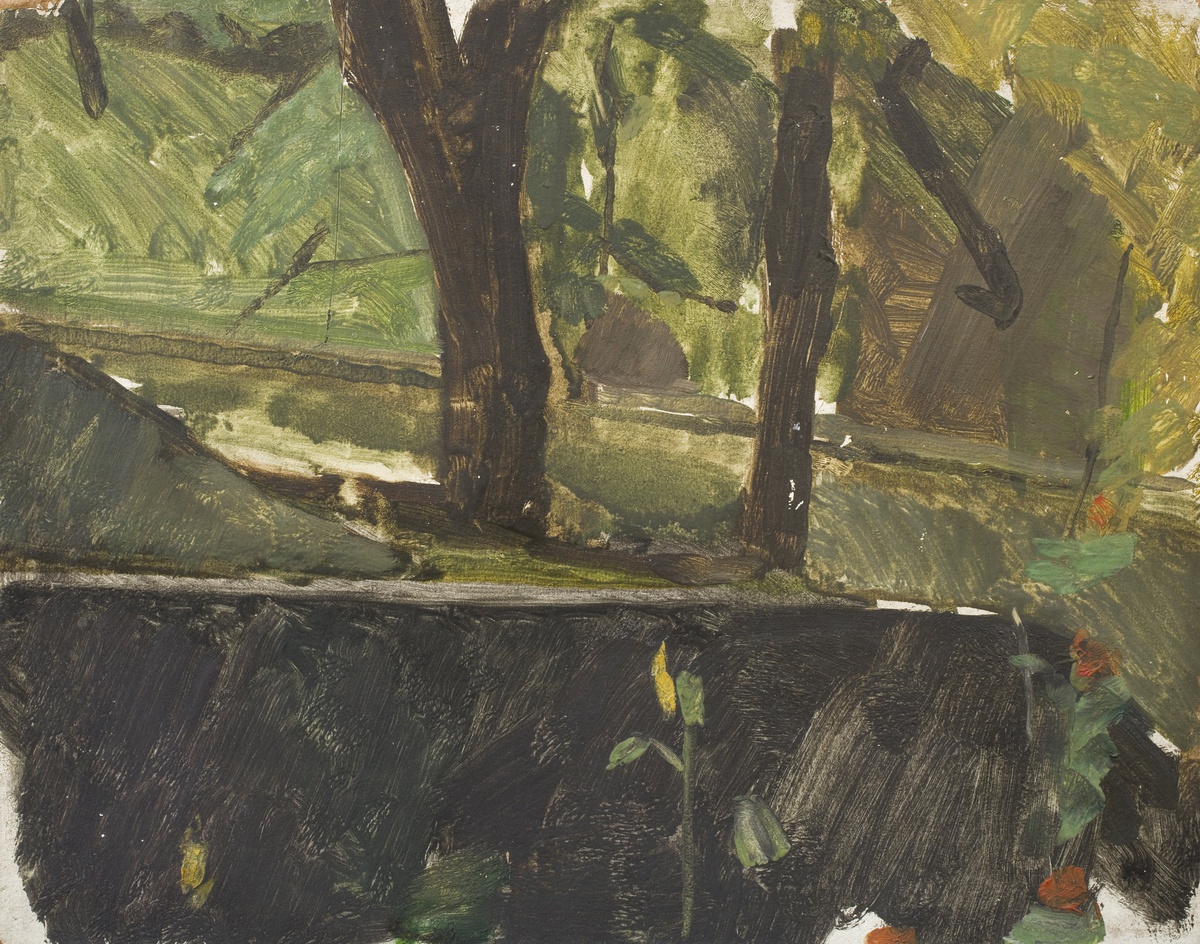 Today, Islington is stereotyped as the domain of affluent socialists. When Michael Andrews lived there in the 1950s, however, it was a place of mixed fortunes, frequented by opportunists ranging from criminals to artists. 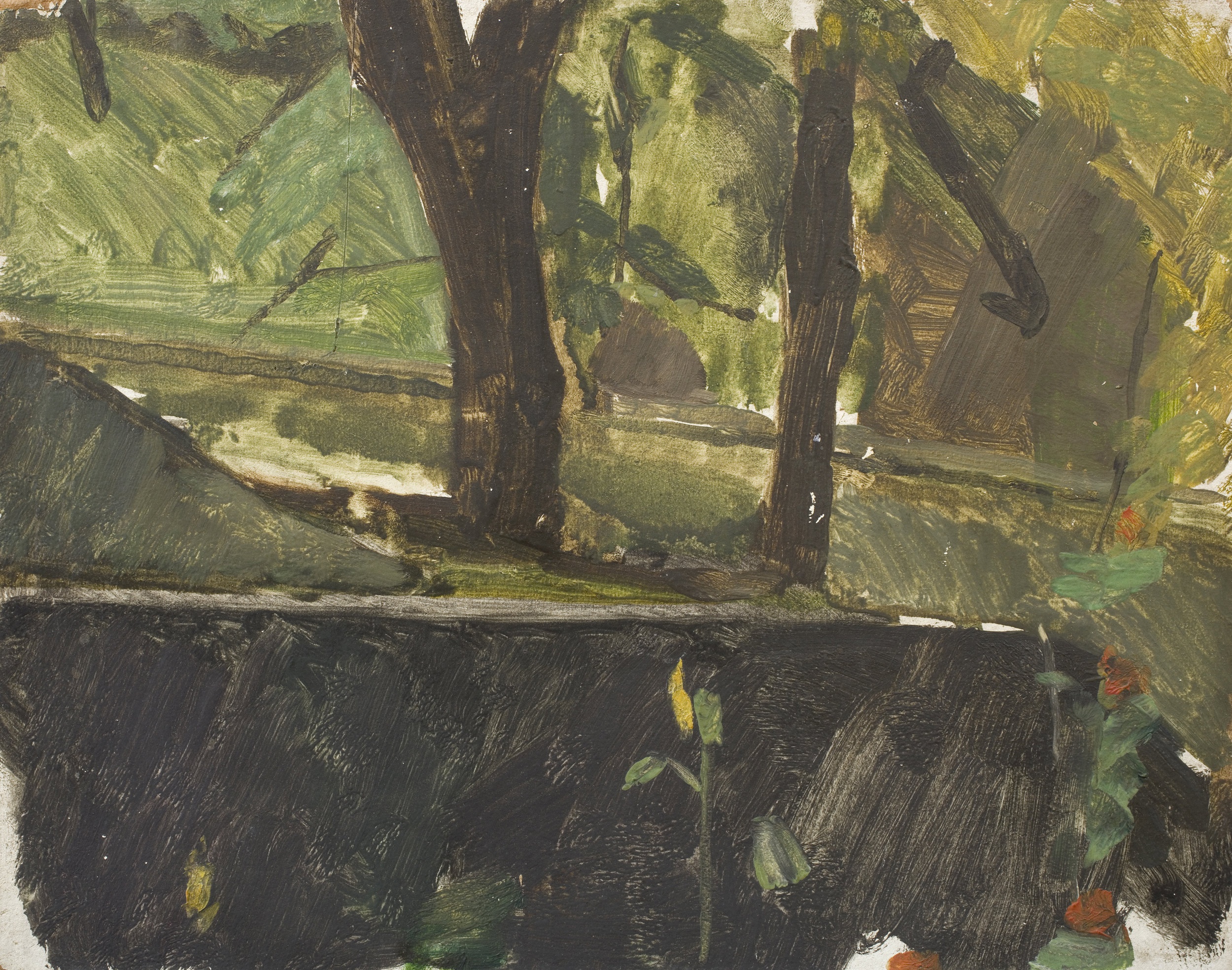 Before and after the Second World War, Islington was fertile ground for artists and writers. It was relatively affordable, while seediness and low-key criminality gave some parts a mood of liberation and excitement. Beside the Pooterish lower middle classes of Holloway at that time, a painter like Walter Sickert used various addresses in Barnsbury, Canonbury and Highbury. His painting and etching The Hanging Gardens of Islington shows the narrow strip of water – an outlet of the Regent’s Canal – which runs between Noel Road to the north and Vincent Terrace to the south. The allusion to Babylon suggests Sickert’s warm affinity with the place, partly borne of happy childhood memories. 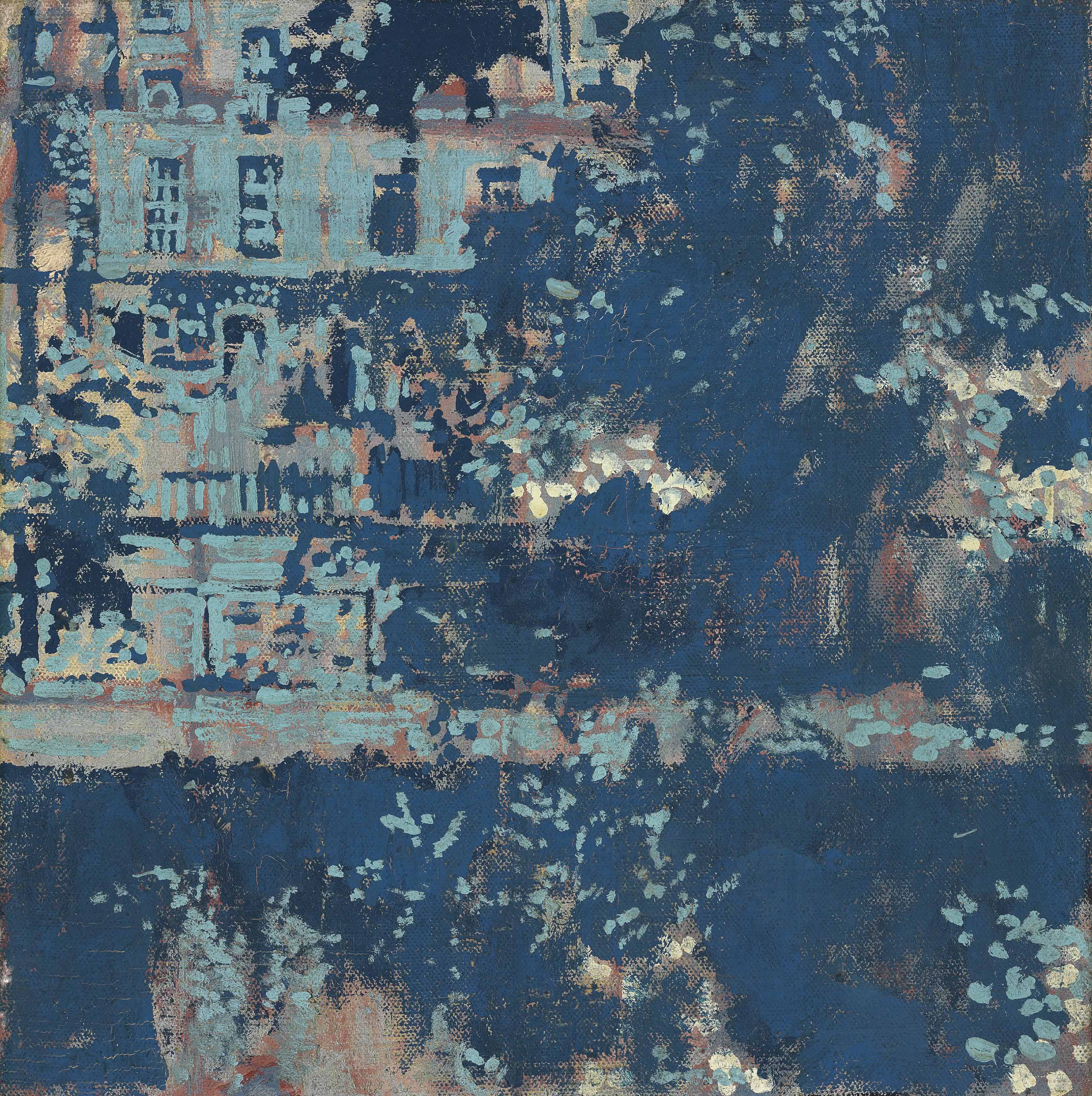 Though Michael Andrews later settled around the corner from Noel Road, he first frequented the area with occasional visits to his Slade friend, Susan Campbell, who had taken the daring decision to buy 6 Noel Road. As Campbell wrote recently,

I bought the freehold with money from my National Savings Book (largely filled throughout my childhood by my maternal grandmother), for £1,400, leaving £600 for improvements. My father was furious as he had discovered that ‘most of the inhabitants of that street were criminals’. It was true that the notorious Kray twins had recently lived there, but I was assured by my new neighbours […] that they wouldn’t burgle or murder people in their own manor.

Andrews later lived in a house which another Slade friend, Tom Espley, bought in Duncan Terrace. For a brief period in the late 1950s though, Campbell’s house was a useful pied-à-terre and an erstwhile painting spot as Garden at Noel Road demonstrates. A photograph from the time shows Andrews working on the picture. 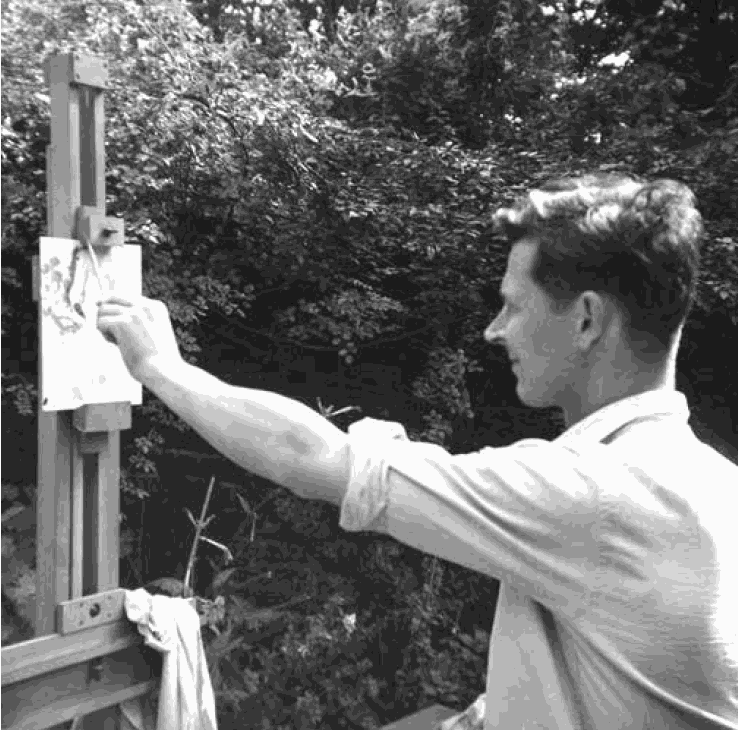 Contrary to Campbell’s assumption, it was not just professional criminals that committed murder in Islington. In 1967, a gratuitous and well-publicised killing happened at the bedsit of an emerging writer, Joe Orton. The crime scene was a small apartment in 25 Noel Road. Orton had been photographed by Lewis Morley and was, like Andrews, part of London’s ‘swinging’ scene. His plays for radio and the stage The Ruffian on the Stair and Entertaining Mr Sloane were bitter, troubled, and well-received. Their frank satire on sexual hypocrisy, especially regarding homosexuality, and undercurrents of violence both had their summation in Orton’s tragic death – at the hands of his lover Kenneth Halliwell, who committed suicide on the spot. 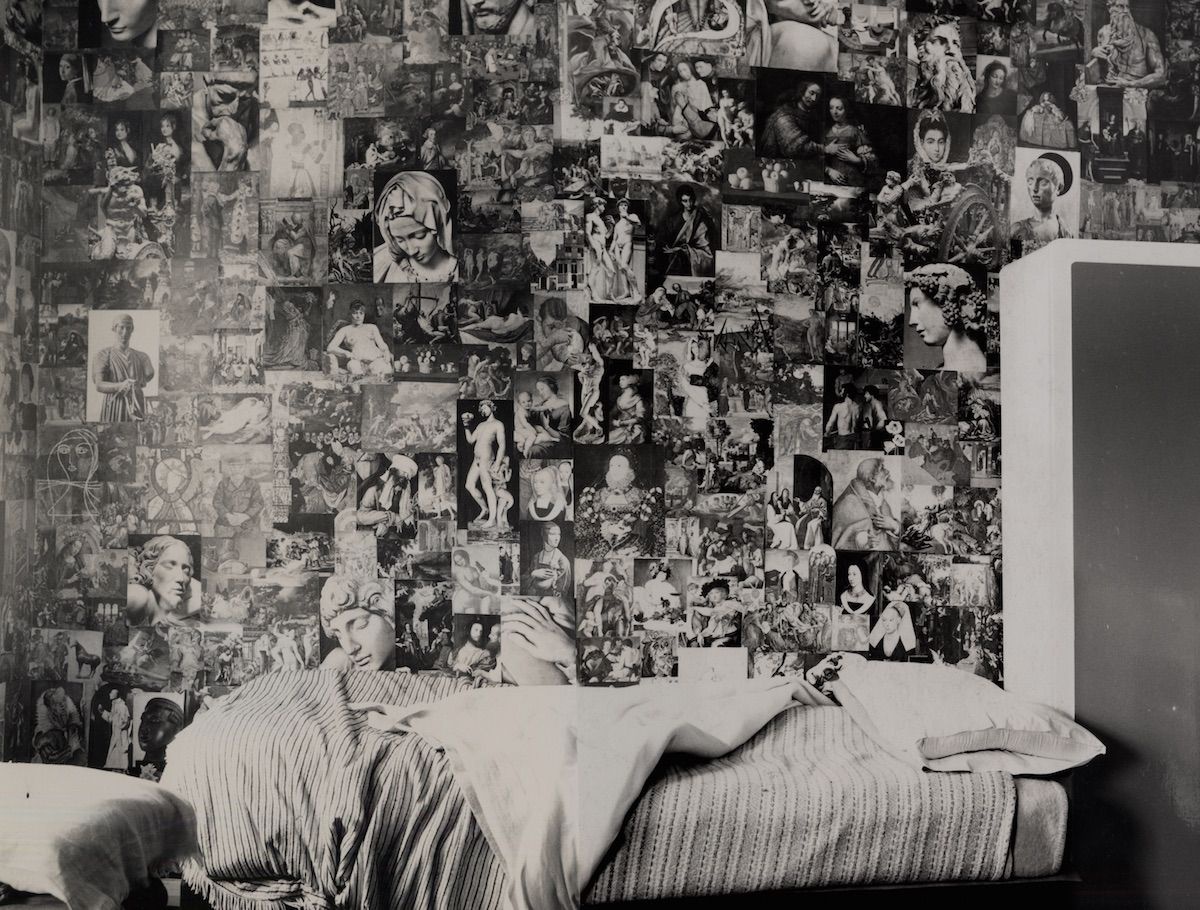 A few doors away from Orton’s place and several years before his death, Michael Andrews set to work on Garden at Noel Road with no thought for the city or its cares. His approach to the subject mirrored that of painters from the eighteenth and nineteenth centuries like Constable and Corot. The practice of sketching in oils was useful to artists (especially landscape painters) who wanted to annotate their observations à la motif. In small-scale panels or canvases, special attention was paid to topography, the quality of the light, the play of shadows and so on. The result of these activities was rarely exhibited in public at the time, mainly because the integral lack of finish was deemed unworthy of formal presentation. 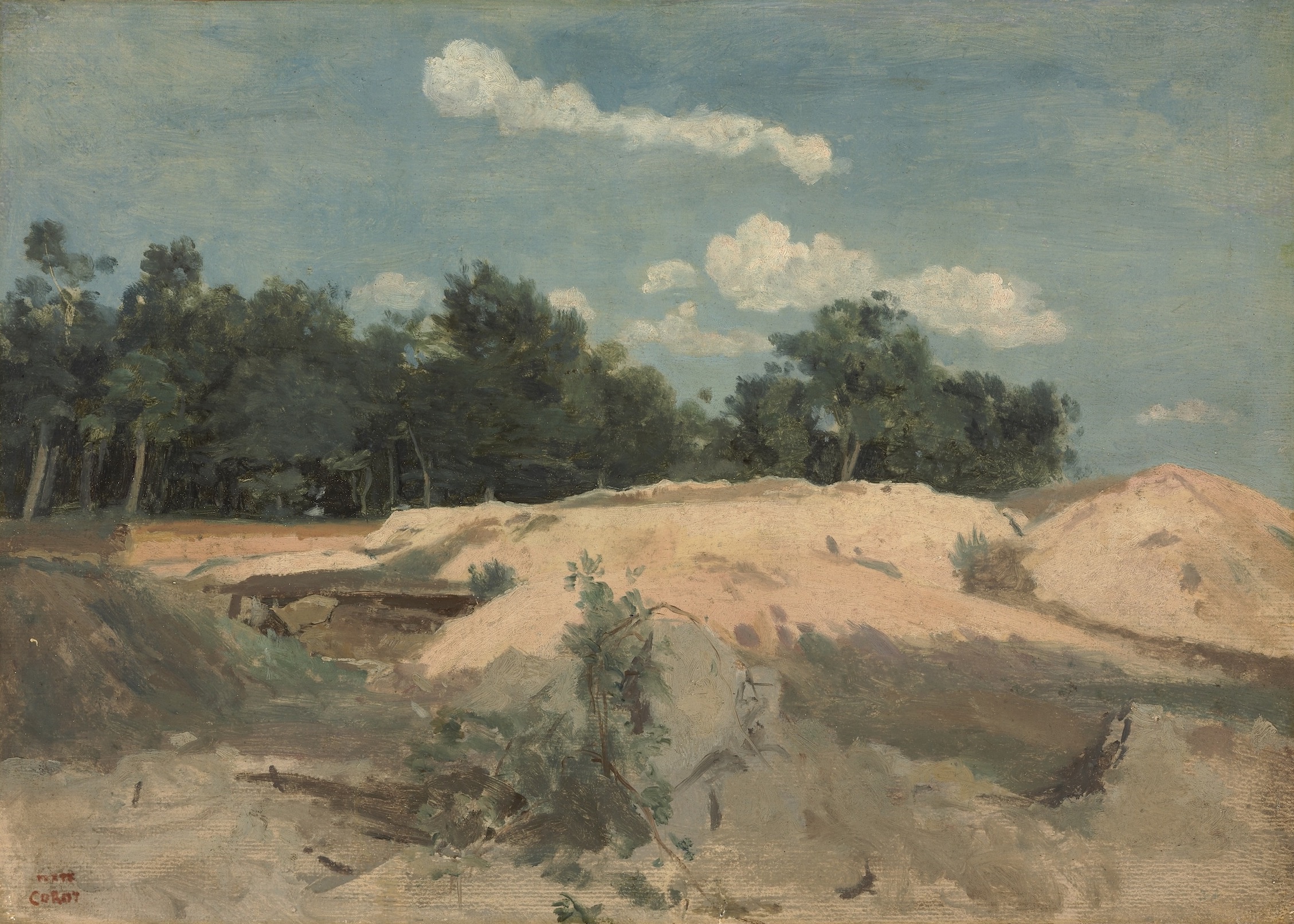 Only in the last sixty years have oil sketches of this type come to be admired beyond a small coterie of connoisseurs. Andrews’s painting predates this popularity and was made before the oil sketch came to be a self-conscious pursuit, inhibited by the possibility of its public presentation. At the lower edge of the panel, free touches of yellow and red indicate sunflowers and climbing geraniums. The narrow range of brown and green tones, each one fastidiously modulated, evokes a sense of dappled shade. Beyond the trees, the surface of the canal blends into the scene – a mirror to the overhanging foliage. The thinned-out paint, loose and pliable, is applied in a single layer. Despite its freshness, the painting is the result of rigorous observation and bears the mark of Andrews’s characteristic care and delicacy. 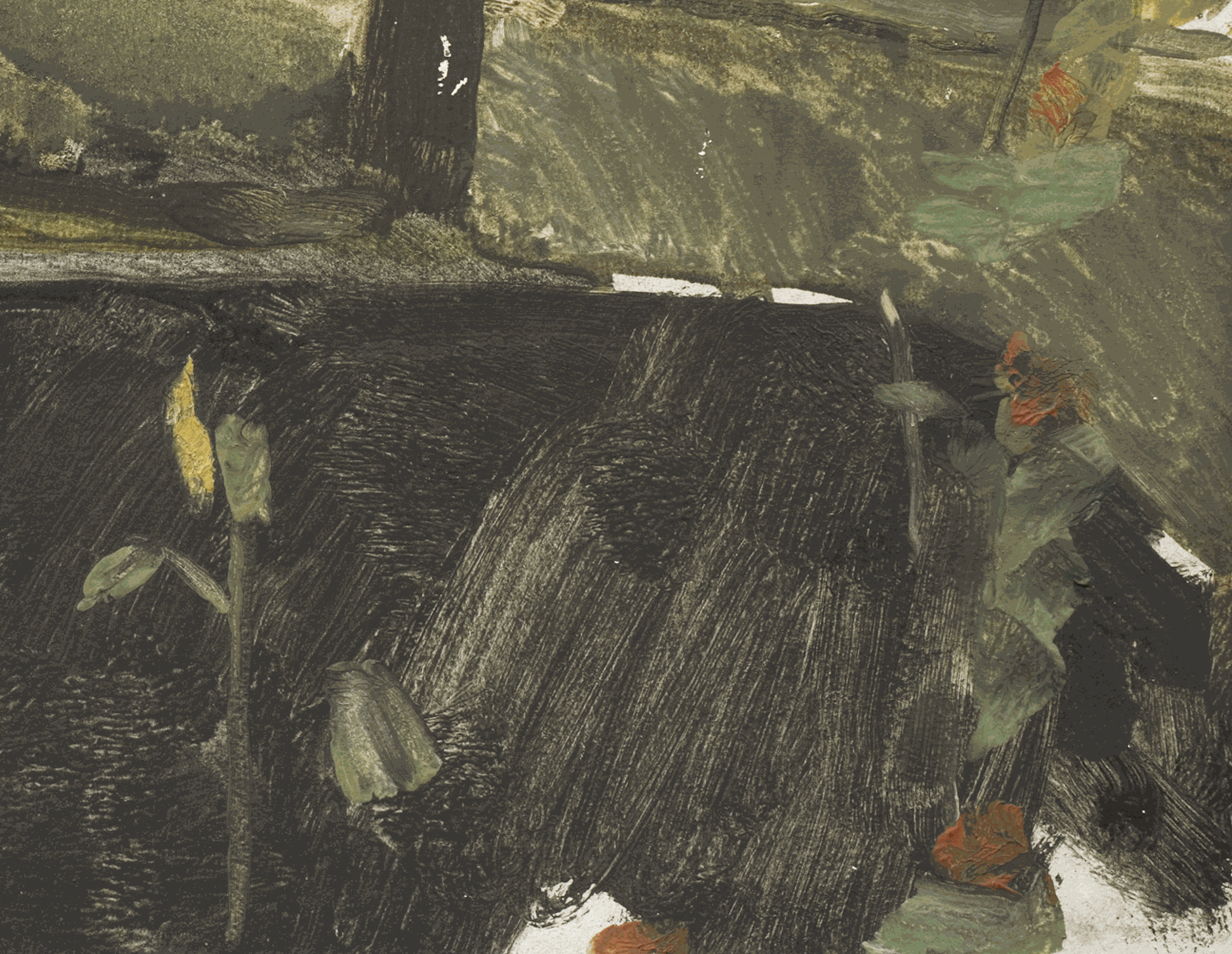