Barbara Hepworth | Disc with Strings (Moon)
Open a larger version of the following image in a popup:
Share

At 4.20 a.m. this morning, the tide in St Ives harbour reached its low point. A resident of the town from 1939 until her death in 1975, Barbara Hepworth observed the rhythmic changes in nature from her garden overlooking the bay. The push and pull of the tide and the changing phases of the moon were captivating to her and found expression in her work.

Fifteen years before Hepworth (1903-1975) made Disc with Strings (Moon), the author William Golding wrote these words:

Somewhere over the darkened curve of the world the sun and moon were pulling; and the film of water on the earth planet was held, bulging slightly on one side while the solid core turned. The great wave of the tide moved further along the island and the water lifted.

Though Golding was not writing about the British Isles, his words suggest the kind of large-scale, god-like perspective of earth which mid-century artists like himself and Hepworth were capable of. Disc with Strings (Moon) carries an undertow of planet-sized thinking, and the work is concerned not with reference to human life but, rather, with the fluid, open-ended life of the universe.

Disc with Strings (Moon) was first exhibited in spring 1970. The display of recent work by Hepworth, held at Marlborough Fine Art in London, also included the sculpture’s companion piece, Disc with Strings (Sun). This pendant suggests the cosmic equilibrium which was prevailing in her output of the period. In simple terms, these sculptures are representations of the sun and the moon. Though both have a clean metallic finish, one is cool and silvery in aluminium while the other is warm and luminous in bronze. This elementary contrast of materials is highly effective, couching these complex stellar objects in a highly ordered, Modernist visual language.

By limiting her materials and simplifying the shapes she used, Hepworth pushed her work to new heights of subtlety. These two sculptures exhibit carefully conceived visual and sculptural effects, playing in particular with shadow and reflection. When Disc with Strings (Moon) is viewed from the front, the two halves of the concave disc have subtly different colour values. Though the brushed aluminium surface is uniform all over the work, a viewer perceives two different values because the two halves of the sculpture reflect light differently. While the forward-facing half of the disc reflects the light directly into the viewer’s eye, the other canted half reflects light away and therefore appears comparatively darker. When viewed from the other side, the colour values of the two halves are reversed.

The introduction of string into the sculpture contributes further to this subtle interplay of visual effects. Speaking to the critic Herbert Read in 1952, Hepworth said that “[t]he strings were the tension I felt between myself and the sea, the wind or the hills”. In short, they were a metaphor for her deeply personal response to the elements of nature. In Disc with Strings (Moon), they also seem to register the rippling of waves, passing over the surface of the moon when it appears reflected in the sea.

Hepworth was not alone in her fascination with the planetary scale of nature. The moon is one connotation of the circles which appear in reliefs by Ben Nicholson, her husband between 1933 and 1951. Like Hepworth, Nicholson was also inspired by the cosmic and poetic qualities of the moon, its phases and its appearance in the night sky. Several of his works allude to the moonrise, for example, among them San Gimignano (Crescent Moon) Feb 14-51. In turn, the idiosyncratic titling of Disc with Strings (Moon)suggests a debt to Nicholson’s habit of naming his own work, combining a literal description with an allusive or poetic association mentioned in brackets. 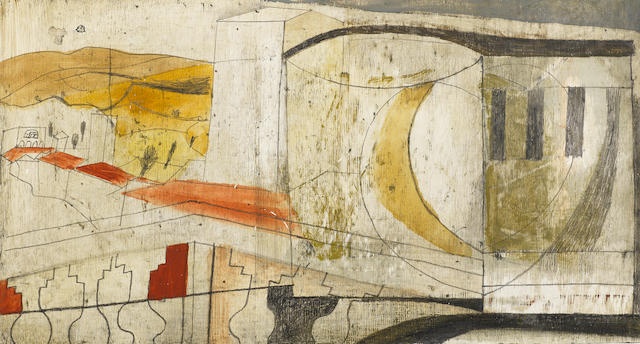 A year before she made Disc with Strings (Moon) and Disc with Strings (Sun), Hepworth was recognised by the local Cornish community and received the Honorary Freedom of the Borough of St Ives. On a different occasion in the same year, she was made a ‘Bard of Cornwall’ in recognition of her contribution to sculpture. This connection with Cornwall was foundational to her art, and her surroundings supplied her with a life-giving draught of unmediated experiences: of the sea lapping, the wind blowing, the light shifting, and the moon rising over the horizon.